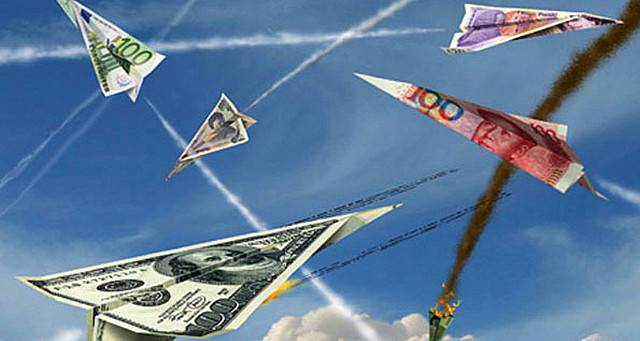 With this we do not refer to the total global trade balance. By definition, this will always sum to zero. The problem of imbalances crops up when certain countries run persistent surpluses and/or deficits. Because then, precisely by virtue of the zero-sum condition, other countries will have to run the reverse, a persistent mirror image, whether surplus or deficit. And the question then is, how is this possible in an age of floating exchange rates? In terms of theory, at least, floating exchange rates should compensate for such imbalances. If a country is running a trade surplus, the currency should appreciate, and vice versa if it is running a deficit, and this should result in the trade surplus or deficit being eliminated. But we have countries that run persistent surpluses or deficits. So what is going on?

The current regime of floating exchange rates has been in place ever since President Nixon eliminated the link between the dollar and gold back in 1971. Prior to that, we had the Bretton Woods system, in which the dollar was linked to gold, and was established as the reserve currency for the world’s monetary systems. Since then, the dollar has still officially played the role of the world’s reserve currency, but no longer like it used to. Back in the day, it was the means by which countries could maintain their currencies at the agreed-upon fixed rate: they needed to hold a certain level of reserves to maintain that exchange rate of their currency. Nowadays, of course, not being obligated to maintain a particular exchange rate, the need to maintain dollar reserves falls away. Or so one would think.

The fact is, even in an age of floating exchange rates, the “float” can be undermined and even negated, precisely by making use of dollar reserves. Two questions: how does this work? And, why would a country want to do this?

The first question, as to how it works: by resorting to techniques that were originally developed during the days of the gold standard (in order to short-circuit it) and have since been fine-tuned.

Essentially, since the dollar is the currency in which international trade takes place, a currency’s exchange rate with the dollar can be depressed by keeping dollar earnings from being exchanged into that currency. This is done by “sterilization,” the process of diverting dollar earnings from being converted into the domestic currency and repatriated into the domestic economy. This keeps the domestic economy from being “inflated” – from feeling the effects of prosperity, and, crucially, from importing more, which would force up the exchange rate. Therefore, export prospects remain undiminished, but at the expense of household consumption. The export machine is maintained at the expense of domestic prosperity. This is referred to as “forced savings,” which is really forced underconsumption.

There are other ways to accomplish the same goal. One is to impose a consumption tax. What this does is reduce spending without reducing production. There is then a surplus of production over consumption, and the surplus production is exported. The exchange rate depreciates, not by any active central-bank intervention, but because demand for the domestic currency declines on foreign exchanges – despite the fact that the country is running a trade surplus. Tariffs work in a similar manner. “Tariffs and consumption taxes always … increase net exports by reducing the real value of disposable household income [vis-à-vis importable goods] and so, presumably, by reducing household consumption.”[1]

Another way is through what Michael Pettis refers to as financial repression. Pettis in fact writes that “financial repression matters to trade even more than undervalued currencies.” Financial repression occurs when countries control the banking system and treat it like a department of state. In that case, the central bank sets interest rates that banks are required to follow, and these interest rates are set at a below-market level. Since households and consumers have no other place to put their money, they are required to accept this below-market interest income. This constitutes a subsidy forcibly paid by households to borrowers – companies. Business borrows at below-market prices, while consumers have interest income taken from them. The result is reduced consumption, and the same effect as discussed above with the consumption tax.

This strategy is a staple of the Asian Tiger model of economic development. Starting with Japan, the Asian Tiger economies have pursued policies by which trade surpluses could be maintained. The following graphs give an indication of the success these policies have had in helping these countries’ export industries:

Similar things can be said about Germany. This country likewise resorts to consumption-repressing policies, although nothing so drastic as the financial repression characteristic of countries like China. And as far as currency manipulation is concerned, Germany is part of the European Monetary Union and so shares a common currency, the euro, with the other member countries, and so cannot engage in currency manipulation. But Germany runs consistent current account surpluses with other member countries of the EMU. How? By virtue of the fact that its exchange rate was locked in at an artificially low level while those other countries were locked in at an artificially high level, and by voluntarily constraining wage growth (via agreement between labor unions, businesses, and government). The result can be seen in this post I wrote a couple of years back.

All in all, pretty much the same thing can be said of floating exchange rates as has been said of humility, Biblical welfare, conservatism, capitalism, even love: it works every time it’s tried. The problem is, it isn’t tried, even in this age of ostensibly floating national currencies. But there are signs that the problem is being recognized, as witness the spate of books dealing with currency wars. Even politicians are getting into the act: Donald Trump pledges to confront China’s currency manipulation. How this will play out going forward is anyone’s guess. But it will most likely continue to remain a bone of contention and true obstacle to realizing a more prosperous and equitable global order.