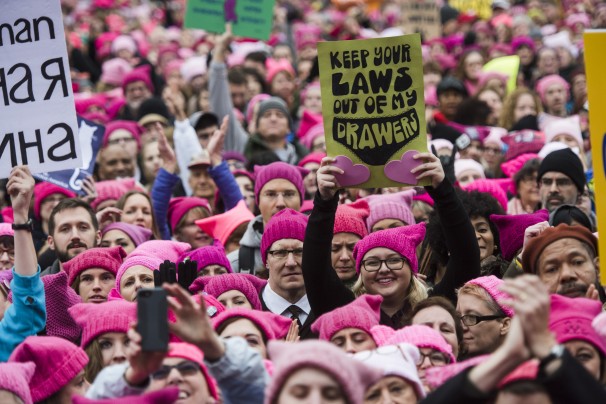 The fledgling Trump administration has been greeted by an explosion of resistance on the part of the Left. The Democratic Party has shown its antipathy in various ways. For one thing, many Democratic members of Congress declined to attend the inauguration. For another, Senate Democrats have delayed the appointments of President Trump’s cabinet appointees, even though they cannot block them. On his first day of office, President Obama had seven cabinet appointments approved by the Senate; President Trump had two.

These are pinpricks. Something much more substantial, if not in terms of government processes, then at least in terms of imagery, was the Women’s March on Washington, conducted on the day after the inauguration. I must say, I had a hard time discerning what exactly this protest was about. At first glance, given the various forms of costume worn by many of the participants along with the rather graphic and potty-mouthed language flaunted by various speakers, the event was difficult to take seriously. It would seem that there was a message there for President Trump, in response to the notorious recording of his words expressive of sexual harassment. But that particular message already loses its force when one recalls that President Bill Clinton was credibly accused of multiple instances of, not words, but actual acts of sexual harassment, and that these very same forces of feminism not only did not protest his presidency, but defended it.

Indeed, there was something more substantial at stake in this protest. It will form a battleground throughout the time of the Trump administration. I speak of abortion rights. This march was a down payment on the pressure that will be brought to bear when Supreme Court nominations take front and center, as they will before long. For all intents and purposes, feminism is abortion rights; the rest is window dressing.

Be that as it may, in all of the splash coverage provided by the news media, not only of this event but also of such irrelevancies as crowd size at, and viewership of, the inauguration, some monumental events have been taking place that have not received nearly the same coverage. Perhaps this is a good thing, for if they received the attention they deserve, events like the Women’s March on Washington would fade into the background, in favor of a strategy geared more closely to actually regaining the influence that has been lost in hitherto key constituencies.

Allow me to elucidate. On Monday President Trump met with various union representatives. Now we all know that for ages, unions have supported the Democratic Party. But after this meeting, the union leadership expressed sentiments that completely confound this traditional arrangement. It seems that Donald Trump is serious about conducting business in an entirely new way, outside the traditional constraints and folkways that have governed Washington for lo these many years.

Consider the statement made by Sean McGarvey, president of North America’s Building Trades Unions and, among other things, a contributor to the Huffington Post:

We just had probably the most incredible meeting of our careers with the president and the vice president and senior staff, when the president laid out his plans about how he’s gonna handle trade, how he’s gonna invest in our infrastructure and how he’s gonna level the playing field for construction workers and all Americans across this country. And then took the time to take everyone into the Oval Office and show ’em the seat of power in the world… The respect that the president of the United States just showed us — and when he shows it to us, he shows it to three million of our members in the United States — was nothing short of incredible, and we will work with him and his administration to help him implement his plans on infrastructure, trade, and energy policy so that we really do put America back to work in the middle-class jobs that our members and all Americans are demanding.

Other union leaders’ comments echoed this sentiment. When the president announced to them that he was terminating the United States’ participation in the Trans-Pacific Partnership (TPP), they applauded. One leader even spoke favorably of President Trump’s controversial inaugural address, saying that it was “a great middle-class address… It hit home both for the people that have been hurting… it was a great moment for working men and women.”

This is stupefying. What it portends, if President Trump and the Republicans in Congress follow through on their promises and implement job-friendly policies, is a massive shift in the political landscape, as the mainly white working class abandons the Democratic Party and lines up with the Republicans. But such has been in the offing for some time; it only took someone with the, shall we say, chutzpah of Donald Trump to actual make this happen.

The focus of progressivism generally, and the Democratic Party in particular, is no longer with the class struggle, which was their original raison d’etre. The focus has shifted to identity politics with its potpourri of multiculturalism and various aggrieved groups, minority or otherwise, the attention of which is directed not so much to economic class than to the criteria of diversity and an understanding of human rights wherein government-funded consumption takes the place of the right to work.

We have documented the symbiotic relationship between neoliberal capitalism and this multiculturalist identity politics in previous posts, particularly this one. What needs to be realized is that this new coalition is incompatible with the old one, the one in which the working class formed the core constituency. In fact, this new coalition is demonizing the old working class, while the president the workers helped to elect is routinely referred to as a “fascist dictator,” perhaps because of the old-school working-class-oriented policies he is enacting. After all, they are so very industrial. You know, sooty.

The question for the new progressive coalition is, having kicked the working class to the side, what is the game plan now? Is it going to be these showy, frothy marches? If so, it reminds me of the following scene from the movie Rango: