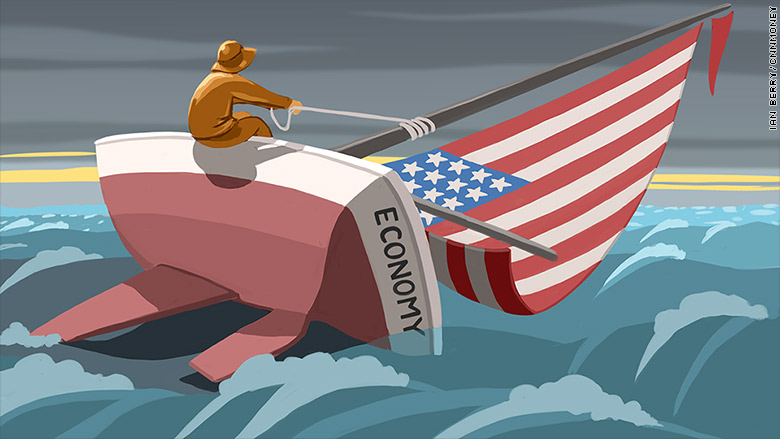 THE WORLD ECONOMY IN RÉSUMÉ

The main flaw is the divorce between production and consumption.

Prior to the establishment of this new macroeconomic structure, supply and demand were roughly in balance in the domestic economy.

We can see this by taking a look at the balance of trade of the United States between 1950 and 1980. In that period, the US economy was the major trading partner for the rest of the world – not to mention that the dollar was then, as it is now, the currency in which world trade is conducted – so that its trade data can serve as a useful proxy for the development of the broader world economy.

During most of this period, the US balance of trade was roughly in balance. Only towards the end of the period did it begin displaying the sharp divergences that would characterize the period since then, albeit here the magnitude of the imbalances is still very small. As we shall see, they have since taken on major proportions.

During this earlier period, some countries did indeed display trade imbalances. Where this was the case, it was the byproduct of colonialist relationships, such as with “banana republics” the role of which was to produce bananas; the same was true of sugar or rubber or oil. These commodities were produced for export, and the economies depending upon such exports were thus at the mercy of the whims of the world market.[1]

So this lack of balance between supply and demand was an exception to the rule. But since the establishment of the new macroeconomic order, that balance in domestic economies has been rudely disrupted by a new way of linking production and consumption.

All of this is orchestrated from the top by the global corporate elite, which uses politicians, the media, the entertainment industry, and academia to further this “bread and circuses” New World Order of universal colonialism. The world is, indeed, their oyster.

This new order no longer balances production and consumption in a symbiotic circular flow within domestic economies. Instead, massive trade imbalances are created, each of which has to be financed. This means that it is debt, not production, that is paying for consumption. The system mortgages the future in favor of the present.

The magnitude of the new order’s collective trade imbalance, and thus dependence on debt, is indicated in the following graph:

The graph shows the current account balance for the world, the advanced economies, and developing economies over the period 1980-2016. The current account balance is a bit different from the balance of trade, as it includes income payments and transfer payments between countries. But these latter are relatively negligible as compared with trade in goods and services. So the two measures are roughly comparable.

What the graph shows is that the changes in the world economy in evidence since the late 1970s accelerated towards the end of the 1990s. Developing countries began generating an enormous collective current account surplus, in line with their role as the world’s producers; while advanced economies developed an enormous current account deficit. This persisted until 2010. With the credit crisis (actually the “debt-funding” crisis) the situation has since reversed somewhat: debt financing has since become hard to come by.

The upshot is that current account (and trade) imbalances became the norm for the world economy during this period, and since these imbalances had to be financed, they have left behind a mountain of debt that at some point will have to be paid off.

Within this framework, the United States has occupied the central role; it is the “consumer of last resort.”

The question now is, has anything changed with regard to the functioning of the US economy to indicate that it has broken with this structurally flawed global economic mechanism? Our conclusion in the previous post was very summary; we opined, with Palley, that stagnation was the direction the economy was headed, given the lack of any sign of a break with this failed model. Let’s look in more detail at the developments in the US economy since the crash.

WHAT THE STIMULUS DID TO PROMOTE ECONOMIC RECOVERY

Prior to the 2008 credit crisis, the US financed its consumption-oriented trade deficit via the housing bubble. This unsustainable method led to the crash. Since then, the US has turned to various schemes, in order to continue to finance this consumption.

The main such policy has been a return to good old-fashioned Keynesian deficit spending. Barack Obama justified this policy back in 2009:

Economists on both the left and the right agree that the last thing a government should do in the middle of a recession is to cut back on spending. You see, when this recession began, many families sat around the kitchen table and tried to figure out where they could cut back. And so have many businesses. And this is a completely reasonable and understandable reaction. But if everybody — if everybody — if every family in America, if every business in America cuts back all at once, then no one is spending any money, which means there are no customers, which means there are more layoffs, which means the economy gets even worse. That’s why the government has to step in and temporarily boost spending in order to stimulate demand.

That speech blames the banks for the crisis, while explaining also why the banks needed to be propped up and bailed out. Only a politician could argue both of these in the same speech and be applauded for it.

The problem with this kind of thinking, as we stressed in the previous post and shall further elaborate below, is that it does nothing to address the underlying structural economic framework that had the crash as its inevitable consequence.

The stimulus came in the form of the American Recovery and Reinvestment Act of 2009. Predictably, the ARRA did not lead to economic recovery. How could it, when it did not even begin to address the underlying problem of debt-financed consumption? The only change was that the government was taking on the debt, rather than consumers directly.

The ARRA set a precedent for deficit spending which has continued, albeit in more muted form, since then. The US has been running record budget deficits in every year since, as can be seen from the following graph:

As can be seen here, the Obama administration has been running deficits that dwarf those even of the George W. Bush administration, which used to take the prize for this dubious distinction.

This has led to a near-doubling of government debt as a percentage of GDP during the Obama administration’s term of office:

This is the criterion. So then, what kind of spending has the federal government been engaging in? In the main, it is consumption as opposed to investment spending, as the following pie chart suggests:

Items such as Health (Medicare and Medicaid) and Social Security are not investment but consumption. Other items on the list can be viewed as partly one and partly the other. In particular, social welfare payments and salaries to civil servants/military personnel qualify as consumption.

Therefore, much of this spending is money distributed to citizens to fund consumption. Which means that much of the federal deficit and federal debt goes toward consumption spending. The same holds true for state and local levels of government.

In other words, most of the burgeoning deficit and debt have gone toward picking up the slack left by the bursting of the housing bubble.

This means that Keynesian deficit spending has not been addressing not economic recovery or restoration, but simply maintaining the status quo that gave us the housing bubble in the first place!

Structurally, nothing has changed.

This is evident from an examination of the US trade deficit during the course of the first 16 years of the 21st century, thus both prior to the crash and posterior to it.

The deficit peaked during the artificial boom years prior to the crash. But – and this is the point – since then, although the magnitude of the deficit has decreased, it is still running at nearly $500 billion per annum.

In other words, the structural flaws of the world economy as outlined in the previous post have not been addressed; only different means have been found to keep the system going as it is currently structured, precisely without addressing its structural flaws, because to do so would harm the interests that are profiting from the current arrangement.

The question remains, is there any prospect of this issue being addressed? As we saw in the previous post, Palley had no confidence that it would be with the Obama administration, and his prediction proved to be correct. But what now? With the 2016 elections we are facing a changing of the guard. Can the candidates’ positions shed any light on this?

One thing is for sure, the latest trade deal, known as the Trans-Pacific Partnership (TPP), is on both candidates’ bad list. This despite the fact that President Obama is continuing to push the deal, attempting to get the appropriate legislation passed by Congress before his term of office expires. Clinton’s opposition does appear to have been forced by both Sanders’ and Trump’s vociferous opposition, and many expect a Clinton administration to include among its priorities the passage of this bill, perhaps with minor modifications.

In a nutshell, the problem with this bill is that it sets up further machinery to arrange trade, not in the interests of the particular countries involved, nor to restore the virtuous circle of domestic economies, but to maintain and perpetuate the production/consumption divorce.

What more might we expect from a Clinton administration? Conveniently, we have a major address on economic policy to work with, given by Hillary Clinton on August 11th. Its key proposal is a renewed stimulus plan that ostensibly will provide the greatest investment in “good-paying jobs” since World War II: “We will put Americans to work, building and modernizing our roads, our bridges, our tunnels, our railways, our ports, our airports. We are way overdue for this, my friends. We are living off the investments that were made by our parents’ and grandparents’ generations.”

The problem here, of course, is that this is precisely what Obama promised. ARRA was supposed to provide a major boost to employment, while also renovating the country’s infrastructure. But as the Wall Street Journal put it in a post-mortem (Obama’s Stimulus, Five Years Later),

The federal government poured billions into the government and education sectors, where unemployment was low, but spent only about 10% on promised infrastructure, though the unemployment rate in construction was running in double digits. And some of the individual projects funded by the law were truly appalling. $783,000 was spent on a study of why young people consume malt liquor and marijuana. $92,000 went to the Army Corps of Engineers for costumes for mascots like Bobber the Water Safety Dog. $219,000 funded a study of college “hookups.”

In the main, the money went not to infrastructure, nor even to productive investment generally, but to the maintenance of existing favored activities in “the government and education sectors,” – thus, essentially, as favors to groups largely supportive of Democratic Party politics.

Will it be any different this time around? In terms of dollar amount, Obama’s stimulus dwarfed Hillary’s $275 billion. Donald Trump has also proposed spending on infrastructure. As The Atlantic points out, “Trump, a builder by blood, has pledged to double that figure, at least. He has called for spending up to $1 trillion on new roads, bridges, broadband, and more.”

If that were all that was to it, then we wouldn’t have much to look forward to as far as structural change is concerned. But Trump has made other proposals as well, which are well worth delving into. We defer that analysis to a later date.