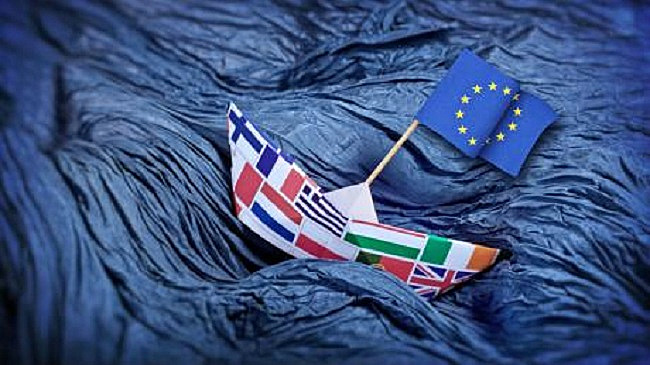 We can conduct a similar analysis of the European economy as we did for the US economy.

We will restrict our discussion to the Euro Area, the countries which share a common currency, the euro. The euro creates a unique, separate trading bloc, the internal dynamics of which need to be understood both to assess the performance of the individual member countries, and to assess their place in the world economy.

Up until 2012, it ran a roughly even balance of trade with the rest of the world, as can be seen from the following graph.

Hence, in the run-up to the credit crisis of 2008, the Euro Area did not run a sizeable trade deficit, as one might expect given its status as a region full of First World “rich” countries.

But this is not to say that it was not afflicted by similar problems of trade imbalances. The difference is that these imbalances manifested themselves within the currency area. In this sense, the Euro Area acted as mini-world economy, manifesting similar consumer/producer relations. Here as well the divorce between production and consumption reared its head.

If we break down the figures for separate countries, this becomes clear. In the following graph, we see development of the current accounts of eight key Euro Area countries.[2]

We can also glean from this that consumption was paid for, not by reciprocal production, but by debt. As we have learned by now from previous posts, trade imbalances have to be “financed”: in other words, they are paid for by debt. When trade imbalances are incurred, the countries running trade surpluses are also exporting capital: this is called a capital deficit. What they are doing is exporting demand, by exporting excess savings. To put it bluntly: they are extending the credit to the consuming countries that these countries require to buy their production.

Such an arrangement was made palatable by the euro. The euro was to be the panacea for all economic ills. Participation in the euro was to automatically bring participation in prosperity. And in the early years of the euro project, that surely seemed to be the case. Funds flowed freely from North to South, fueling a boom across these countries, especially in the period 2005-2007, as the following graph indicates.

But this growth was fueled by the debt implicit in the current account imbalances shown in the previous graph. Capital exports (i.e., credit from the exporting to the importing countries) were fueling consumption. The assumption was that the euro constituted surety for this indebtedness. The debtor/consumer countries being locked into the arrangement, they would not be able to devalue their currencies to reduce the value of that debt. And so it was safe to furnish the credit that would pay for the southern countries’ consumption.

Spain was at the epicenter of this debt/consumption nexus. We can get an idea of this by juxtaposing external debt with the balance of trade, as pictured in the following graph.

This debt binge, as in the US, took the form of a housing bubble. “The only way [Spain] was able to grow for many years prior to the crisis was with a surge in domestic credit that expanded the nontradable goods sector – real estate and consumption, for the most part, with surging real estate itself fueling further borrowing and consumption.”[3]

But it was not only Spain that in this manner paid the piper. Other countries as well participated in this spending binge, as the following graphs indicate:

Greece is of course the poster child for the, in retrospect, exorbitant and entirely irresponsible spending spree that characterized the pre-crash period, and which was gladly financed by the exporting countries of the North. The only problem with this method, as we saw with the world economy, is that it is unsustainable. At some point, the punch bowl is taken away, and whoever is left holding the bag is also left holding a slew of “odious debt.”[4]

In the aftermath of the credit crisis, the Euro Area has had to adjust to the collapse in consumer demand, just as has the United States. In one respect the two have followed similar paths: government deficit spending has served to fill the gap. The following graph shows how government debt has grown in the US and in the Euro Area.

The trajectories are quite similar, although the magnitudes differ somewhat: the US’s ratio of debt to GDP has burgeoned to over 100%, while that of the Euro Area now exceeds 90%.

This is one way the Euro Area has compensated for the drop in demand. Another is by resorting to exchange rate depreciation. This has improved the terms of trade for Euro Area exports and thus helped improve economic growth.

The trend line refers to the exchange rate of the euro vis-à-vis the dollar, and clearly indicates a downward trend, which has the effect of making Euro Area exports more attractive. Because of this, the surplus on the Euro Area balance of trade has steadily widened. The Euro Area is thus attempting to export its way out of its present difficulties. But we now know where such a strategy leads: to dependence upon foreign demand, which itself is funded by capital exports.

We should make mention of one other attempt to boost demand: quantitative easing. Here as well, the Euro Area has followed the lead of the US, force-feeding the central banks’ balance sheets with bonds, which has the effect of flushing the money market with liquidity.

The following graph shows the extent of the operation. Here again, the trend lines are similar although the magnitudes differ somewhat: the Federal Reserve System now has about $4.5 trillion on its balance sheet, while the Euro System has about €3.4 trillion (about $3.8 trillion at current exchange rates).

This together with deficit spending was to bolster economic growth. Nevertheless, that growth has remained fairly anemic:

The fact of the matter is, neither of these strategies for fomenting growth are sustainable.

Quantitative easing is only a temporary panacea; at some point those bonds are either returned to the market or become due. In both cases, this removes liquidity from the money market.

The attempt to export one’s way to growth is likewise a dead end, as every country that has tried it has eventually discovered, to its cost. This is why Japan is moribund and why China is heading in that direction. Export-led economies need import-led economies to absorb their production; if those import-led economies for whatever reason stop importing and stop demanding, the export-led economies are left high and dry with essentially superfluous production capacity. On top of that, the trade imbalances that are required for this model require the continual buildup of debt, a similarly unsustainable course of action.

This is the reason why economists like Michael Pettis keep urging these export-led economies to rebalance away from dependence on exports towards a more balanced model based first and foremost on domestic demand. This would restore Palley’s “virtuous circle of growth” and the link between production and consumption, having the one pay for the other in the circular flow of the properly functioning economy.

What stands in the way of this? Recall Pettis’s explanation (in this post) of the techniques by which export-led economies generate excess capital with which to fund trade surpluses. They do so by implementing various policies that in effect force their own citizens to “save” rather than spend. Pettis’s list includes:

In the European situation, it is VAT which jumps out on this list. VAT constitutes an enormous hindrance to consumption spending. The result is to ease pressure on exchange rates and so foment export performance, but at the expense of domestic consumers.

In his book The Great Rebalancing, Pettis points out another method by which Europe’s economic engine, Germany, has been able to generate the massive trade surpluses it has in recent years, especially in the light of its trade deficits in the 1990s. This came about through wage repression. German workers have agreed to have wage growth restrained in order to promote the greater good, which in this case is the German export machine. Pettis’s explanation merits quotation in extenso:

After German reunification in the early 1990s, Germany faced the problem of very high domestic unemployment. It resolved this by putting into place a number of policies, agreed on by trade unions, businesses, and the government, aimed at constraining wages and consumption and expanding production in order to regain competitiveness and generate jobs. Although these policies may have made sense for Germany and the world in the 1990s, … the creation of the euro introduced a new set of currency and monetary rigidities that would change the impact of these policies both within Germany and abroad.

Specifically, as wage growth was constrained in Germany by relatively tight monetary policy in the German context, it was left unconstrained in peripheral Europe because monetary policy there was, paradoxically, too loose given underlying conditions of rapid growth and rising prices. These policies resulted in an increasingly undervalued euro for Germany relative to the rest of Europe, low wages for its level of productivity, high consumption and income taxes, and expensive infrastructure funded by these taxes.

In that case it is not surprising that German GDP growth exceeded the growth in German household income, because households were effectively forced to subsidize employment growth, and this subsidy reduced disposable household income and consumption relative to total production….

The high German savings rate, in other words, had very little to do with whether Germans were ethnically or culturally programmed to save— contrary to the prevailing cultural stereotype. It was largely the consequence of policies aimed at generating rapid employment growth by restraining German consumption in order to subsidize German manufacturing— usually at the expense of manufacturers elsewhere in Europe and the world.[5]

The upshot of all of this is, Europe is as wedded to the system of neo-mercantilist trade imbalances as is the rest of the world. It is here that change needs to come, but no policy proposals are in the offing that even bring this problem set to the table, much less propose solutions to it.