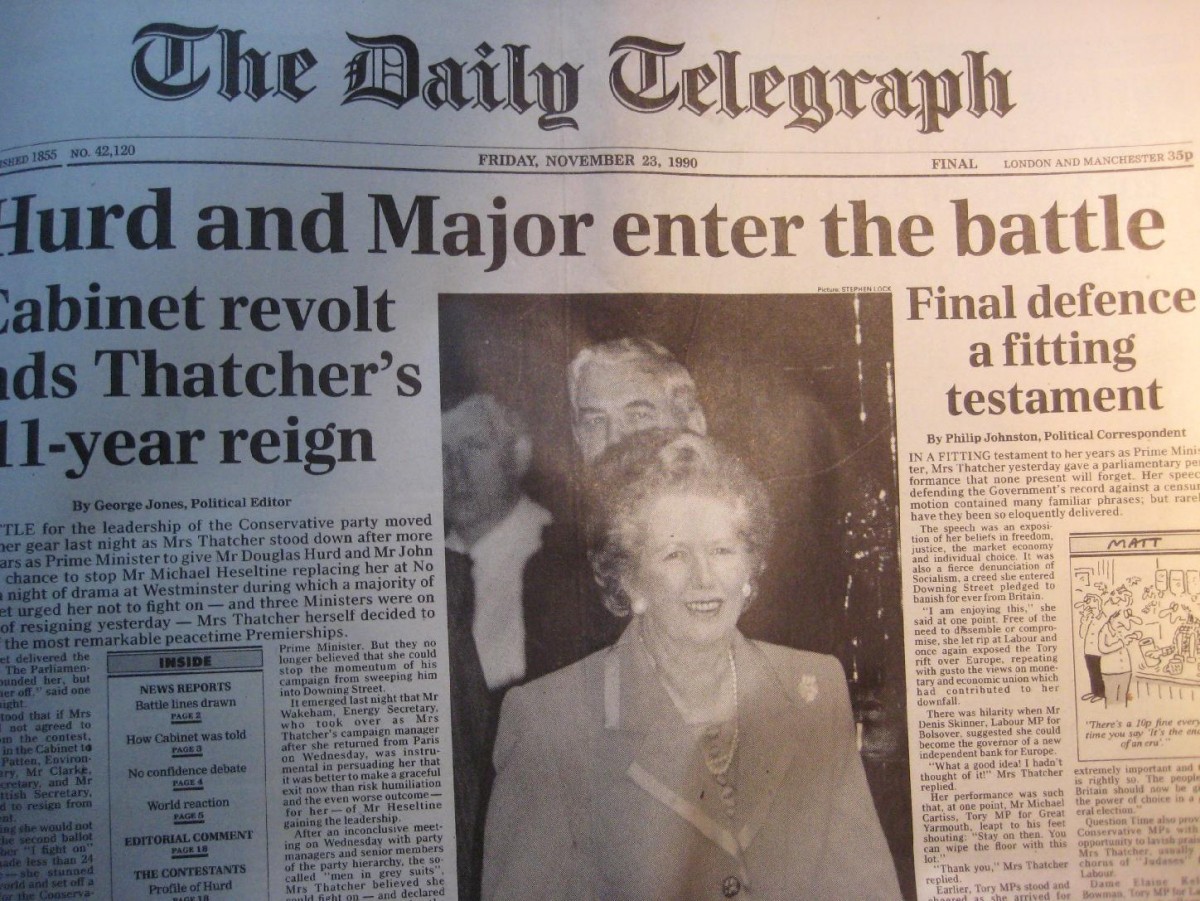 The British vote on June 23rd, 2016, to leave the European Union, is one of those events that will long be remembered. Yet there was another event involving Britain on the one hand and the European Union (then Community) on the other, that likewise came as a shock, and which likewise lives on in the memory, at least for those who, at the time, were political aware. I refer to Margaret Thatcher’s resignation of the prime ministry, exactly 25 years and seven months earlier, on November 23rd, 1990. Personally, I remember exactly where I was and what I was doing when I heard that bit of news over the radio.

Thatcher’s resignation resulted from her opposition to European union. She paid the price by being cashiered by her own party, not by the electorate. I wrote an article in 1991, discussing this event, its significance, and what I considered to be its historical relevance. In terms of the latter, the article was flawed in its diagnosis, but not in its recognition of that relevance. And today, I think that Margaret Thatcher is looking down with a sense of grim satisfaction.

To honor this event, I excerpt from that article, published in 1991.

It came so suddenly as to leave the world in a state of shock. Margaret Thatcher, the “Iron Lady,” the fighter who would rather die than quit, did just that: she voluntarily resigned her position as Prime Minister of the United Kingdom. She did so as she reflected on what “a funny old world” it should be that a party leader never defeated in a general election, still commanding a majority of her own party, who had led that party to three successive election victories, who had spearheaded a thoroughgoing reformation of public policy whose very name was synonymous with that reformation, should be forced by her own party to resign her post. Truly these were rather funny goings-on.

To top it all, it was not any strictly domestic issue but “European unity” that brought all this about. To many, she was the champion of a by-gone era of national sovereignty and “Little England,” “the prim and condescending leader of a has-been empire bent on turning back the tide of history, a latter day King Canute who actually believed the sea would heed her.”(1) So it was portrayed: Thatcher versus Europe, isolation versus community, proud independence versus peaceful cooperation. And it turned out to be an Achilles’ heel which her opposition lost no time in exploiting as soon as opportunity presented itself.

Her enemies’ strategy worked. But to characterize Margaret Thatcher’s position with respect to the European Community (E.C.) in these terms is, at the very least, open to question. She regarded herself the most pro-European of them all; nevertheless her approach to and her concept of unity differed – fundamentally – from theirs.

Perhaps the key element of difference lay in the goal of monetary union. Thatcher remained to the end staunchly opposed to the formation of a pan-E.C. single currency administered by an independent central bank. Most others see such an arrangement as the indispensable core of a truly common market. Across Europe as a whole, the goal of monetary union commands broad support. Certainly it was this issue more than any other which isolated her from her peer heads of state and made her vulnerable to attack at home.

Such issues have not heretofore been the stuff of dramatic controversy, at least if one follows standard historical accounts. Most historically-conscious folks have a vague recollection, for example, that the establishment of a central bank in the United States was a very hot issue from time to time and was finally brought to pass with the Federal Reserve in 1913 (which isn’t really a true central bank but rather a “federally organized” group of regional banks). But they remain supremely indifferent to the subject and would much rather look into the accounts of politics or war or class struggles, or perhaps “social” histories of “everyday life” in such and such a period. The history of banking and monetary policy is definitely a subject for the specialist. And thus supremely boring.

Yet as contemporary events should insinuate, a long look needs to be taken especially at the history of monetary union. Upon further inquiry that history proves to be decisively important to understanding our present and certainly what Margaret Thatcher would consider our predicament. One has consequently to go back to its roots and see how and why it has become so fundamental – as it truly has – to modern society….

Mrs. Thatcher … faced opposition on two major points – domestically, the poll tax issue, and in external affairs, her position concerning the European Community. The poll tax weakened her position with respect to the electorate, enabling her opposition in the Conservative Party to gain ground on her. But in the final analysis the poll tax is not what felled her.

The timing of events leading to her fall is conclusive here. At the annual party conference in early October [1990], the Conservatives showed themselves lackluster, despondent, without much enthusiasm for the upcoming elections which they feared they might lose. More than anything else, it was the Europe issue that divided them. Many in the party were leaning toward a strong pro-Europe stance; Sir Geoffrey Howe, for instance, argued for full acceptance of monetary union, and Michael Heseltine preached pro-union to a well-attended side meeting. On the other side were the anti-union forces worried that Mrs. Thatcher, who had been showing herself conspicuously indeterminate in the last months, would be “led gently to monetary union, like some doddery old lady, with Mr Major and Mr Douglas Hurd… at either elbow.”(2)

Thatcher herself was then “ambushed” at the E.C. summit in Rome at the end of October. Italy’s prime minister Giulio Andreotti presented a proposal with definite dates for achieving monetary union, something which caught Mrs. Thatcher by surprise. This seems to have woken her from her lethargy. Back home she gave a rousing speech in the House of Commons against monetary union and giving over national sovereignty to Brussels. Her old followers were delighted. Others wondered how long she would last.

It was this speech and her renewed hard line which led to the resignation of Sir Geoffrey Howe from her cabinet. And it was his resignation speech which solidified the opposition against Mrs. Thatcher, prompting Michael Heseltine to run against her in the party election. Howe vociferated against her “anti-Europe” position, arguing that it jeopardized the future of the nation and its role in a united Europe. And then of course Heseltine gained enough votes on the first ballot to force a second one, after which Thatcher resigned.

It was, then, undoubtedly the Europe issue which brought Thatcher’s downfall. That much is clear. In the final analysis, however, not even the politicians were ultimately the cause. The powers-that-be want monetary union, and if anyone stands in their way, they will simply remove him, or her, to get it. The politicians know this and act accordingly if they know what is good for them. The people do not know any better than to accept this goal because it is proffered to them by every available media source from which they derive their opinions.