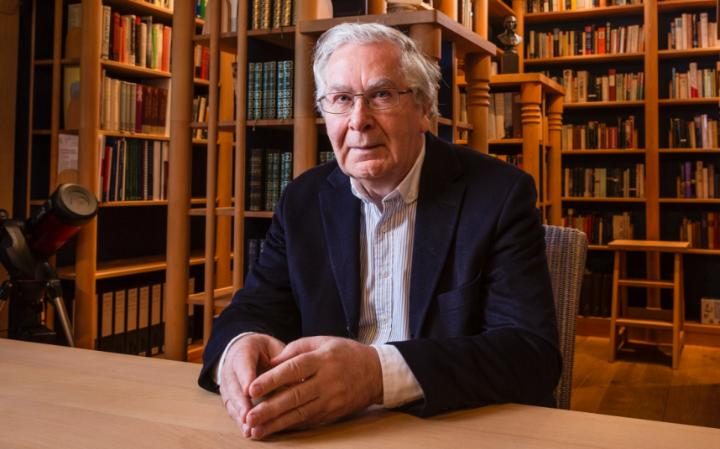 Michael Lewis, the author of various illuminating accounts of the events and progressions of the great financial crisis of 2008 – one of which became an Oscar-winning Hollywood movie – this time provides us with an illuminating account of someone else’s book – Mervyn King’s newly published The End of Alchemy. The thesis is a familiar one: the banking system is fundamentally flawed, and this is the cause of most if not all of our economic misery.

As befits a governor of the Bank of England (2003-2013), King is of course a veteran of the various banking vicissitudes of the 21st century. It is on the basis of this tenure that he writes this book, analyzing problems and offering remedies. But he does not wish to come across as someone with all the answers. As he writes in the introduction, “Many accounts and memoirs of the crisis have already been published. Their titles are numerous, but they share the same invisible subtitle: ‘How I saved the world.’” King may not want to save the world, but he certainly wishes to subject the banking system to a thorough reworking.

This is because the situation is that bad. What was behind the Great Crash of 2008? “Bad incentives that are still baked into money and banking – and so quite likely to create another, possibly even greater, crisis.” Still baked into: for, despite the (“arguably”) biggest financial crisis in history, nothing that addresses fundamental problems has changed. Shareholder limited liability encourages risk-taking, as shareholders take advantage of that absence of liability; deposit insurance encourages depositors to lodge money with banks, without regard to the riskiness of said banks’ lending policies; too-big-to-fail remains entrenched, encouraging gigantic risks to be run in the knowledge that if they turn sour, a bailout will be forthcoming.

Furthermore, the steps that have been taken ostensibly to mitigate the problem have only served to conceal it. Or, as Lewis puts it, “it’s being used to disguise how little has actually been done to fix that system.” Lewis quotes King: “Much of the complexity reflects pressure from financial firms. By encouraging a culture in which compliance with detailed regulation is a defense against a charge of wrongdoing, bankers and regulators have colluded in a self-defeating spiral of complexity.”

On this score we have a framework that seems designed for failure. There is the problem of moral hazard, which basically refers to the fact that when something is insured for, it is actually fostered or encouraged. Insurance against risk actually encourages risk. This problem is not restricted to the banking sector; it is endemic to any form of insurance. And then there is the web of ineffective regulation that seems to make a mockery of attempts to improve the situation.

King has an alternative. It is to revamp the banking system so as to eliminate risk-taking with other people’s money. “Deposits and short-term loans to banks simply need to be separated from other bank assets. Against all of these boring assets, banks would be required to hold government bonds or reserves at the central bank in cash. That is, there should be zero risk that there won’t be sufficient cash on hand to repay people wanting to flee any bank at a moment’s notice.”

So these deposits would be kept separate from other bank assets. These latter indeed could be used to finance the risky business of trading. These assets would have to be acceptable to the lender of last resort, the central bank, in case of financial crisis. And this acceptability will have been determined beforehand. “The riskier assets from which banks stand most to gain (and lose) would … be vetted by the central bank, in advance of any crisis, to determine what it would be willing to lend against them in a pinch if posted as collateral. Common stocks, mortgage bonds, Australian gold mines, credit default swaps and whatever else.”

The upshot is what Lewis calls “the King Rule.” As Lewis describes it, a bank must have on its balance sheet enough assets to cover withdrawals of its short-term liabilities (deposits plus short-term loans to the bank (one year or less)). But of course, you say, of course it has assets to cover those liabilities – that’s what double-entry bookkeeping is all about: every liability on the balance sheet has a corresponding asset. But here’s the rub: in the process described above, of the central bank vetting collateral, these assets would be given a “haircut” – assigned a discount at which the central bank would be willing to rediscount (buy) the asset, in case of a liquidity shortage. And it is this “haircut” valuation that banks in future would have to respect before putting funds out in quest for returns.

How exactly would this work? In the example Lewis provides from King’s book, a bank has $100 million in assets. Of these, $10 million are reserves deposited with the central bank, $40 million are “relatively liquid securities” and $50 million are “illiquid loans to businesses.” The central bank values these assets at 100%, 90%, and 50% of full value, respectively – these are their “haircuts.” Thus, in the eyes of the central bank, the bank’s assets “in a pinch” are worth $71 million, not $100 million. And therefore it cannot have more than $71 million in short-term liabilities. What other liabilities are there that could fill the $29 million gap? Lewis answers, “a lot more equity and long-term debt” than currently is the case.

With all due respect to both Mr. Lewis and a former governor of the Bank of England, I don’t think this is how banks really work. The suggestion is that banks receive deposits and short-term loans and turn around and invest them, sometimes in riskier material, sometimes less risky. So that banks don’t do anything except play with “other people’s money.” But banking doesn’t work that way. The very fact that they engage in what is referred to as fractional-reserve banking, in which they are allowed to “create” a multiple of amount of reserves they hold at the central bank, belies the notion that they only act as passive receivers of money.

In the case referred to above, the bank with $50 million in “illiquid loans to businesses” has on its asset side these loans; but on the liability side, it has deposits it created when it made the loans. That $50 million was not already in its coffers, waiting to be lent out. Not all of it, at any rate. Much if not all of it wasn’t there at all.

This is not to say that banks do not receive deposits. Of course they do. But these deposits, in turn, had to come from somewhere. Those funds weren’t always “just there.” It was in fact created, in the very process of credit extension. This is what Joseph Schumpeter clearly saw, and integrated it into his theory of economic development.

Unlike the deposits created by the bank to lend to businesses (“illiquid loans”), these deposits do run the risk of being removed and placed with another bank, and for that eventuality the bank has to have a contingency plan, e.g., only use that money in ways that can be quickly recovered. But for the loans to businesses, that money will always be replenished: the businesses will be depositing future income even as they withdraw for expenses, and this will remain in a rough balance. This is not the danger to the banking system, and it is hard to see why, on the face of it, these loans should require such a “haircut” as 50%. They are long-term investments by the bank. They are the beating heart of the capitalist system. They are not the problem. The problem lies elsewhere.

The argument of King’s book, then, is to put an “end” to “alchemy.” But this “alchemy” is already built into the very nature of the system. It cannot be gotten around by mandating certain levels of “safe” asset holdings. The focus on quality of collateral is good, but it needs to be done properly. Banks certainly need to ensure that the collateral they accept is marketable, is liquid. But that is easier said than done: because this is not a function of banks, but of markets. And market dysfunctionality goes far beyond bank policies.

There has been a glut of liquidity on world markets in recent decades. Lewis himself knows this all too well: he himself chronicled it in his excellent book Boomerang. Another excellent chronicler and serious economist to boot, Michael Pettis, in his book The Volatility Machine, shows just how this liquidity deranges markets. We like to think of markets as being driven by economic fundamentals, but Pettis shows how, rather than this, they are liquidity-driven, tossed about by massive flows of funds in pursuit of shrinking returns. And banks, together with the burgeoning shadow banking system, are at the forefront of trying to place these funds, running ever increasing risks in the process. This is the dysfunctionality, not so much “illiquid loans to businesses.”

The effect of liquidity-driven markets is to make market valuations go awry. We get asset bubbles and collapses, gyrating valuations, and therefore gyrating bank balance sheets. The collateral-based banking system is struck in its heart. But this is not the banking system’s fault per se, but an ever-increasing oversupply of liquidity.

Where did this global liquidity glut come from? A good portion of it has been the result of the collusion of transnational corporate interests with governments (and central banks!) of low-wage countries by which exchange rates are pegged to favor export industries. The method by which this is accomplished is sterilization – the practice of preventing foreign-exchange earnings from being converted into domestic currency. This has resulted in trillions of excess dollars. Japan and China have been at the forefront of this. The accompanying graphs tell that tale.

For the rest, the very existence of debt overhang that afflicts the global economy also spells excess liquidity. The so-called law of reflux explains why. In a nutshell, when debt is repaid, liquidity is extinguished in the same amount. This is a function of the way our banking system creates money. So then, when debt is left unrepaid and instead is constantly rolled over, that liquidity is not withdrawn from the system. It lingers. Hence, excess liquidity.

To make a long story short: what we need is not so much an end to alchemy but an end to the range of toxic fiscal and monetary policies intended to rig the system in favor of various interests. Debt rollover is one of those, as it is simply a result of the too-big-to-fail approach. All of these interests are conflicting. But they have now coalesced in a globalist order that enriches the few at the expense of both workers and entrepreneurs, in both the developed and the less-developed worlds. That’s where we need to focus our attention.